When I saw Alastair’s photograph of a castle, I thought of all the fairytales I had read as a child. (many) and knew I would be writing a fairytale. This is a short story, not a flash fiction and it far exceeds the 150 word limit of this writing challenge.

His photograph this week was excellent inspiration for me and I encourage you to join in the fun of Alastair’s Photo Fiction writing challenge! Click here.

To read a brand new fairy tale read on:

The Princess and The Maid – A Fairytale

She was spoiled. It was well known in the kingdom. Since her birth the King and Queen had given her everything so she always got her way. As a result she grew up with complete disdain for just about everyone and everything; except for one person, the scullery maid. The lowest servant in the castle, Gwen was a sweet gentle girl who was always rescuing small animals and was kind to all.

From the time she was old enough to talk, Princess Catherine was pampered and surrounded by adults. They were everywhere. The only time she was allowed to be just a little girl began the day Gwen (only a few years older) felt sorry for her and snuck her into a hidden room, accidently discovered in a remote part of the castle.

Gwen the servant, playing a fairy

From then on the Princess and Gwen would sneak off whenever they could to giggle and play, pretending to be beautiful woodland fairies before going back to their respective positions in life. One very high and formal, the other a lowly servant. They grew to love one another as sisters. In their own secret world. 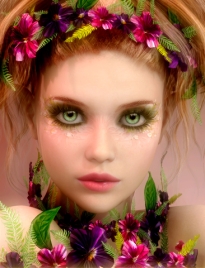 Princess Catherine playing as a fairy

They continued to meet as young adult ladies, although not as frequently. When Gwen would comment on the rude behavior of Catherine to others, Catherine dismissed her words saying, “they aren’t worthy of my bother!”

Gwen would insist that everyone had value and worth and then go about her business. Her words, as usual, ignored by the haughty Princess Catherine. This might have gone on forever, her selfish, spoiled behavior. Except that one day she noticed Gwen had been missing for awhile.

She asked her personal maid where Gwen was and was told she was very ill and would probably not survive. The princess rushed through the castle upsetting all until a carriage was arranged and the princess transported to a tiny little hovel at the end of the village, where the only true friend she had every had, the maid Gwen, lived.

The cottage, no more than a hovel, was sparsely furnished. In one corner, a bed where her friend lay, barely breathing. Upon seeing her friend, she hurried over, tears in her eyes. The princess knelt by the bedside, grasping Gwen’s frail and fragile hand. Gwen slowly opened her weary eyes and when she saw the princess she smiled. “You came, your highness” She said very faintly.

The princess knew the maid did not have long to live and in a sudden moment of realization she finally understood what her friend had been telling her for all the years of their friendship. “Oh Gwen you mustn’t die, you are too good to die. I should die instead, I am selfish and unworthy of life but you are so pure and good.” She sobbed not caring if her royal face was stained and puffy with tears.

Gwen coughed, her voice a soft whisper as she spoke her last gentle words to her noble friend. “Then you shall live for me, and you will be as good as you can be to all those you meet. And I shall live on, through you my friend. Promise me you will do this. And we will be sisters forever joined through the bonds of love.

On the day Princess Catherine made the  promise to her dying friend, she changed and become the model of a loving caring individual. She went on to rule as Queen, and not for a single second, of a single day, did she ever forget her promise. The noble Queen had learned to become humble, with the death of her only friend. From that time on, she ruled with love and cared for all.

Today we need fairytales more than ever. Fantasy for certain, but an engaging way to learn and remember a few of life’s, sometimes, harder lessons. I hope you enjoyed. Have a wonderful week!

25 thoughts on “Alastairs Photo Fiction – The Princess and The Maid”