A new photo prompt from Alastair. A challenge to write a flash fiction, a few hundred words. For information on how to join in the writing fun click here! 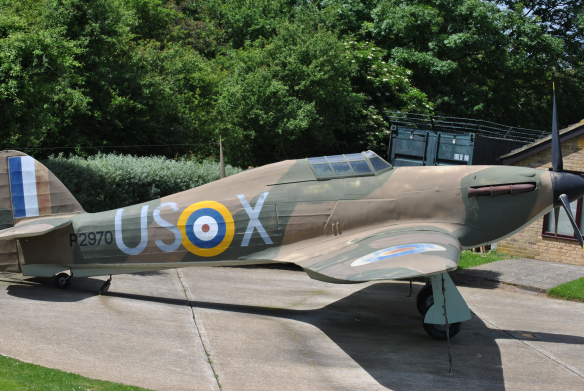 Sitting in the cockpit of his fighter aircraft, George was twitchy. This, the seventh night in a row. Designated one of the “intruders” each night he’d patrol the German airfields in France from his Hawker Hurricane attempting to catch night bombers during takeoffs or landings.

Henry should have been up here with him, flying nearby. He was gone, shot down in action. A life long friend, gone. But he wasn’t going to think about that. He could see the illuminating lights from the German airfield.

His focus tonight, centered there. He tried not to think about the enemy below. Tried to control the sweat coming out over his body, running down his back, his ribs. He hadn’t been afraid before, though there were the cannon shell holes, evident in the wood and fabric covering of his fighter aircraft from previous engagements; it had never bothered him. They had been invincible.

He and Henry, the invincible duo. It had become a joke with their friends, they did everything together, took risks for the fun of it and then the war and they joined the RAF (Royal Air Force) together, of course. Not for the fun of it. No this was different.

A fight for their freedom. And they had not only put together a good team, but after each squadron’s successful run, each air victory, their fellow Fighters would cheer their return. Not tonight. Tonight the squadron was one less, without his comrade at arms, his buddy, his life long friend.

Circling above, he continued to watch the glowing lights from the lit airfield beneath him. He had never felt so empty, so alone … so afraid.

~ Thanks for stopping by,
Penny