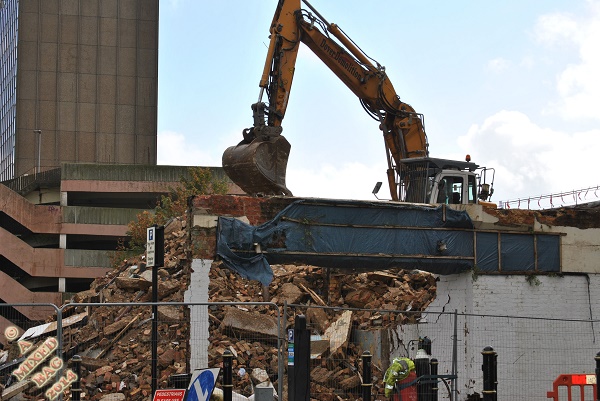 “Just one more shot, from another angle!” The man in charge yelled to the photographer who nervously moved to another section of the building being razed. He knew he’d been lucky to get this photo shoot. He could use the funds, but more important, it meant he had a reason to be here.

It was going to happen today. He could feel it in his bones. Bones, ha! That was a joke wasn’t it? After all these years too. He was sure his secret would’ve stayed safe, that the building would have survived. At least longer than he did. But here he was today shooting pictures while the building was torn apart.

He’d been so young, barely an adult, when he opened his restaurant on the corner of the building. In fact, the whole thing had been a bit of a joke, not long after it opened. It’d been late at night, the restaurant was closed and he and his friends were all high on something or other. He didn’t remember who had found the dead body of the drunk in the alley. What he did remember was that they all thought what a hoot it would be to use the body in a soup.

The next day he didn’t show up at his restaurant until the middle of the day to find that the “soup” had been a huge success and everyone wanted more. He could’t tell his help where the meat had come from, but that night after everyone was gone he took the remaining bones to the cellar, removed some of the bricks lining the basement walls, put the bones inside and wedged the bricks back in place.

He then went looking for another dead body in the alleyways of London. When he couldn’t find any drunks, who’d conveniently died there, he assisted in that as well. His restaurant became a huge success for quite awhile, and then one day he realized there was just no room left anywhere in the basement for the bones and he was weary of the whole charade anyway.

He closed his restaurant and became a photographer. “So here I am”, he thought to himself. “Right on hand to take a picture when they discover the …”

“Hey,” he heard a man yelling from the site of the building. “You guys aren’t gonna believe what I just found. Get that photographer over here. This is incredible!”

As the photographer headed towards the voice he had one final thought. “So my last photo shoot will be proof. And the proof was always in the pudding … the blood pudding!”

Yes, yes I know this is waaaaay too long, but being the spooky freaky month of Halloween I just felt compelled to let my story write itself and it doesn’t count words! So this isn’t a flash fiction but just a short story! Still I hope you enjoyed it.

For more fun stories and to take part in one yourself (as the writer) check in with the best host ever, Alistair, at Sunday Photo Fiction. He’ll fill you in on all the details!

Have a great day and better tomorrow!

15 thoughts on “Sunday Photo Fiction – The Proof is in the Pudding!”