In the still of every night

The stars may still be shining bright

But Darkness in the light of day

Makes hard to keep our fears away!

I do not know from when to where

Cannot conceive how we can’t care.

What we’ve become to darken ways

Where have gone the love and joy

for every single girl and boy.

STOP, stop no more I say

THIS, this is not the way.

Brothers, Sisters are we all

All together or we fall

and fall and fall

and fall and … fall!

In folklore, telling someone you’d leave the light on for them was a friendly way of saying you looked forward to their visit. But that was in another time, another place and as far as John was concerned a completely other existence from his current one.

Hiding out in the decrepit old mansion he was pleased there was no electricity. He looked forward to the safety of darkness soon to envelop the estate with the coming night. He felt safer in the dark.

Which was rather amusing in light of things, he thought, giving out a harsh bark of laughter. And then repeating to himself, “In light of things. Too funny, I made a pun.” No pleasure in his laughter, though.

It was a truthful pun. As a child he’d been deathly afraid of the dark and always had a night light on to feel okay before he’d sleep.

Now, a light on meant someone would know he was here. He glanced up at the silently mocking chandelier. Life did work in mysterious ways. He sighed a weary sigh, and settled in to wait for the safety of the lightless night.

To take part in this writer’s challenge, just check in here at Sunday Photo Fiction Your host, Alastair, will guide you through the process. To read other entries (fun and well written), click on the little blue link box, while there.

Hope your enjoyed, thanks for stopping by,

With a little bit of whimsy relating to light, does anyone remember where the following humorous phrase originated from: “Put the candle BACK!” (I just love this movie by the way, tons and tons!)

Yesterday was Time Out For Art at Zeebra Designs and Destinations. An every Thursday affair where Lisa encourages you to take a break and draw! I’ve really missed participating in the last few weeks, and am pleased to be only a day late this week. Although, I was drawing yesterday, I didn’t get it posted until today. Be sure to check out her wonderful blog.

For me drawing is one of the most relaxing things I can do, my mind letting go of day to day worries and focusing on the art of drawing (or painting, or sculpting, or writing, etc ….) while listening to music. A creative outlet!

Recently I’ve been working on a sketch for a blogging friend in England that many of you know, Ute! She sent me a photo, and while I’m still working on the actual sketch that’s more in keeping with the photo itself, I decided to experiment with Light and Dark and Ute’s face.

So I imagined that a bright light was illuminating her features from the left, washing out most of the detail on the left side of her face with shades of darkness and shadows on the right.

This is what I came up with: What do you think Ute? (And yes, I had already asked her permission to do this).

And here’s her photograph! 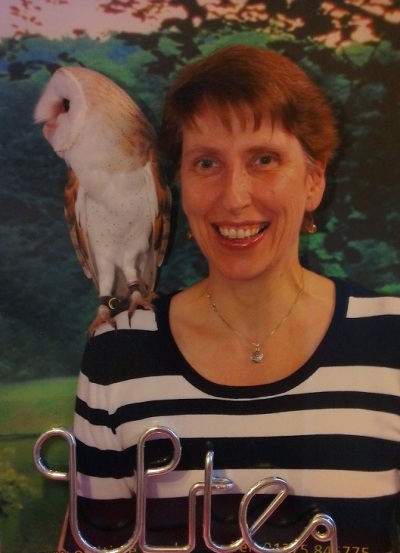 An excellent photo of Ute – and the owl’s a hoot! LOL

Be sure and visit Ute’s at Ute smile, she’s a delight! And she just returned from Spain where she not only spent time with her mom but also visited another excellent blogger and friend, Ralph – visit him too, his blog is excellent!

Thanks for stopping by, Enjoy your weekend my wonderful friends!