We must leave in no doubt the pure poetic power

found within a single flower emitting a sensual immediacy

of beauty most profound.

Yet even greater, and in addition to, is the resonating frequency of life

this one single flower transmits for all to experience and know,

if we would but allow ourselves to feel:

… the overlooked ethereal, eternal symmetry of just … being.

Welcome September and a very warm welcome to all my friends. Those I know and those I’ve yet to meet. May your days and weeks ahead be filled with creative happenings and positive experiences. I wish you well.

Wisdom enters gently
within these changing days
to always walk among us
in myriads of ways.

With change does come renewal
as nature always knows,
and the seasons of our lifetimes
ever onward flows.
~Plh ♡ 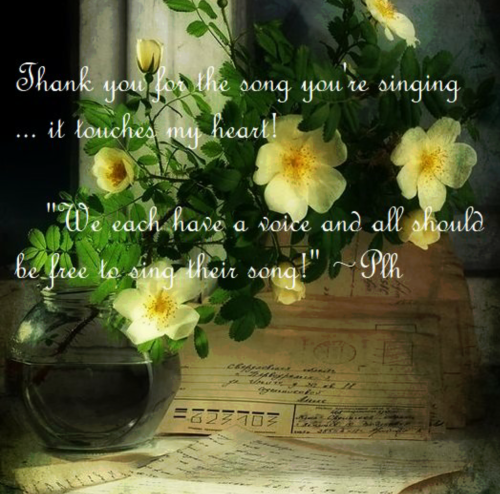 Everyday wisdom is indeed hidden in plain sight, but it is humanity’s songs of life, each unique to an individual that points the way, often illuminating a hidden wisdom, revealing a greater understanding and awareness for many, and so …

” I thank each of you for the songs your singing. May you sing loud and strong in your life sharing wisdom and beauty with each beat of your heart.” ~ Plh

Thank you for stopping by, Have the best weekend possible. I wish you well.

~ Well written words reveal themselves to be branches spiraling ever outward; releasing and igniting an ever changing spectrum of emotions ripe with potential for the emergence of new thoughts and ideas from those readers/speakers of our verbal creations.

~ Whether fiction, nonfiction, prose, scripts, lyrics or other, writers do much more in our crafting of words than just informing or entertaining.

~ Perhaps we may view each of our written endeavors as not just creative methods of communication and/or expression, but more aptly as inventions of innovative and thoughtful imagination, serving up potent catalysts of change involved with the evolution of who (as human beings) we are or in an even more expansive view ~ of who we’ve yet to become. ~Plh, 2017
*

“Life is a learning experience testing our mettle with each passing day, presenting a surety of unknowns that try our patience. Yet these self same experiences offer obscure but true opportunities (clues) for enhancing our very being, propelling us forward with awakening humility – a catalyst towards an understanding of who and why we are.” ~Plh, 2016
♡

Thank you. Wishing you a most pleasant and restful weekend, one filled with hope and love.

A parable inside the unknown surrounded by accepted reality (Or … what happens next is up to you)! 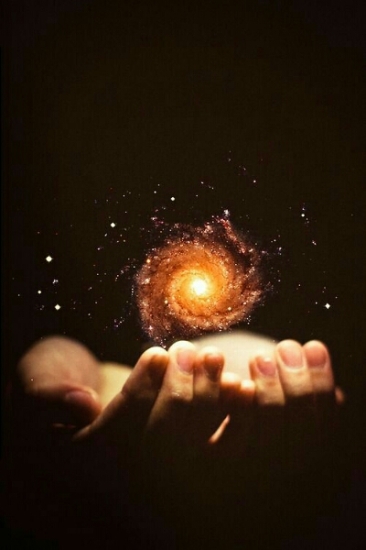 “Hey! What’s that you’re holding in your hands? I can see light streaming between your closed fingers.”

“Oh you mean this,” the young lady responded.  She spread open her hands into a cupped position revealing a swirling glowing orb nestled in her brightly lit palms.

“It’s tomorrow,”  she said. “Well, sort of. Actually I’m holding time itself. Okay, to be absolutely precise you can view this as the energy of time. Like a miniature version of our solar system.”

“Oh don’t be ridiculous,” he responded. “Are you insane, you can’t hold tomorrow. It’s not a thing. That makes no sense, besides it hasn’t happened yet and you certainly can’t hold time either because it’s not a thing either so it’s … it’s … well it’s impossible.”

“How do you know it’s impossible?” The woman countered with a grin. The glowing orb seemed to swirl and shine more intensely while she spoke.

“Because it absolutely is. Some things you just know.” This he stated in a dismissive matter-of-fact manner.

“It’s obvious.” He added, even as he remained mezmerized with her current evidence to the contrary. He continued to watch the glowing orb and a small doubt began to worm its way into his brain’s clearly limited thinking capacity.

“Alright then, my good fellow,” said the lady holding the orb. “If you truly believe it’s impossible then you won’t mind if I drop this ‘orb of tomorrow’ on the ground so that it shatters?” She began to open her fingers.

“WAIT!” The man quickly thrust his hands out and up indicating she should stop. “Not saying I believe you, but if what you say is true why would you do that?”

“Why, to prove my point of course!” She stated, paused in her actions as if to consciously deliberate his words in her clearly more developed and open mind.

“Then what happens if there’s no tomorrow?”

“I don’t know. I’ve never dropped it before.”

“But if what you say is true, tomorrow won’t come!” His anxiety was mounting.

“Nah. According to you that would be impossible … right?” She smiled a confident little smile and let the brightly lit orb drop to the ground.

Nothing appeared to happen, as the ‘orb of tomorrow’ shattered into a multitude of sparkling pieces.

“What does this mean? Nothing happened.” His heart beating rapidly, the man surveyed the various pieces of orb laying all around.

“Well, not that we can see … at least so far,” came her ambiguous answer. She bent over and carefully picked up pieces and shards of broken orb placing them into the various pockets on her jacket. She paused then with a look of concentration on her face.

“Although we can’t really see frequencies.” Her brow was furrowed deep in thought. “But we can feel them. Frequencies of good feelings and bad feelings that will shape our thoughts and actions. So, I guess maybe we’ll be able to sense any changes that happen.”

“Yeah, sure. Fine. Whatever!” He said dismissively. “But what about tomorrow. Is it going to come or what?”

“I don’t know, I guess we’ll find out soon enough.”

“Point? Oh, right. I’m thinking the point was we have more control over what happens in our everyday lives than we think we do … if we act on them.”

“Okay, I guess I sort of understand that.”

“Good.” She began to leave.

He continued on. “… but what about tomorrow?”

“I guess we have to wait and see, unless you’d like to give today a try. We can test my ‘orb of today’ if you like.” She turned back towards him holding out a new glowing orb in her hands.

We, each one of us, do hold the reality of our future (today and tomorrow) in our hands. We should never doubt it, not for a single nano-second. Things may be happening all around us but we still have the ability to respond with how we’re going to react.  What we do with our reactions … that’s still up to each of us, isn’t it?

Hope your week is going well. As well as may be expected anyway, my friends.

Take care of you,

With much open and unconditional love,

You have emotions and “feel” certain things every day of your life. Depending on the experiences of that day, your feelings are happy or sad, angry or hurt, excited or bored, painful or ecstatic; but you always feel something.

In addition to everyday feelings we have our heartfelt feelings. You know the ones. They turn your life upside down and change everything, either good (which is an excellent feeling) or bad (definitely not so good)!

This then, is your life and each day you’ll be the one who either allows feelings to control actions or you learn to take a deep breath and then act in a reasonable way, wisely determining when to give your feelings “free rein” and when to hold on tightly to them until that surge of emotional upheaval passes.

Which will be in ascendance for you, your mind or your emotions?

“Wisdom ~ definitely the acquired elixir of life’s learned experiences from which one intuitively knows when to imbibe and when to refrain.” ~ Plh

Be safe and have a positive week.

We are of nature.

When the two things (human beings and the natural order of our home planet Earth/Universe) are separated and viewed as different, unconnected and apart from one another, a grievous imbalance occurs harming all life; as may be seen today. Connect with your natural roots ~ it is as life (all life) should be!

Please do, for a better today and an even better tomorrow.

Many of us never tire of reading and repeating famous quotes.

Quotes are inspirational, regardless of subject matter, but bottom line, the main reason we love famous quotes is because of nuggets of wisdom buried within the quoter’s words.

We absorb these quotes because at subliminal levels we feel a sense of purpose or well-being, perhaps love, happiness, hope, awareness, understanding, determination, sacrifice, illumination and yes maybe even the feeling that we’re in touch with – wisdom of the ages.

Therefore there will always be room in our minds or our hearts for quotes:

“He wrapped himself in quotation as a beggar would enfold himself in the purple of Emperiors.” ~ Rudyard Kipling

I hope you’re having a happy and fulfilling weekend. I wish you well.

He, alone in contemplation. Curious and saddened, wondering if he were the reason things had gone wrong, knowing only the way of things and he but a vessel of knowledge, not a portent.

She, the portent. Change swirls about her. Spiralling out. Fibonacci wisdom, from seeds to galaxies ~ her key. She holds the golden key tightly. Her key.

She opens doors to a new awareness. A new reality? So much change. Is nature not to still be nature? Can she really do all this? Yes, she can.

Ahhh, he reflects, of course. She is of nature and birth and growth. She is of life, not death. Her change is the correct change. No more killing fields. Mankind will change. It is so.

He wonders what … how … he will be after the change.

The golden key, a mere symbol, she herself – the key of change. But this change signifies a new balance. Yin Yang become relevantly/irrelevant. Such is this nature of change.

And so it comes ~ A time of great change. Are you ready?

Release date Early Spring of 2016:
The Spiral Corridor
A scifi/fantasy novel (or our actual future?) by P.L.Howe